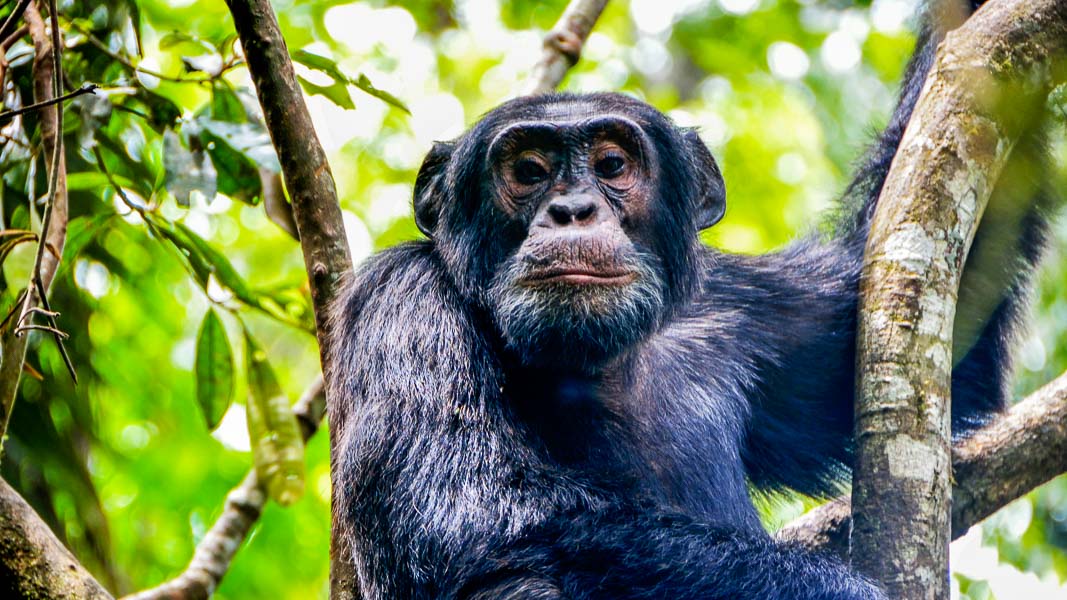 KFNP is located in Western Uganda and the forest is 775Kms, 45% tropical woodland, 40% grassland, 15% swamp vegetation. The most common trees are the Wild Rubber trees, Polita Figs which support fauna and flora.

The area is largely occupied by two tribes i.e. Batooro and Bakiga traditionally both tribes utilize the forest for food, fuel, building materials and medicines.

Other interesting mammals from the list of over 60 species include Ichneumon, Banded and Marsh Mongooses, Alexander’s Cusimanse, Swamp Otter, Ratel ( Honey Badger ) and African Palm Civet. Although Golden Cat, Serval, Lion, Leopard, Warthog, Giant Hog and Hippopotamus are recorded from the park, they are unlikely to be encountered in the Kanyanchu area. Sitatungas are known from Bigodi Swamp but are infrequently seen. The spectacular and beautiful Rhinoceros Viper is fairly common here but is, unfortunately, less often found alive than as a road-kill.

Kibale offers very within your means chimp tracking. Groups (restricted to 6 people) leave daily at 8:00 am and 3:00pm; the walks last about 3 hours. The suggested night walks depart from Kanyanchu Visitor Centre at 7:30 pm which you should book in advance. Remember to bring your torch! Gumboots are also recommended during heavy rains or can be hired at the visitors centre. Walk lasts about 4kilometers in length, taking around 3-4 hours at birding pace. Proceeds from eco-tourism go back to the community. Kibaale Forest National Park is worth visiting to support the community.

The most popular of Kibale’s walks starts from the Kanyanchu Visitor Centre at 08:00 and 15:00 and lasts 2-3 hours. Chimpanzees are the Primate most sought after by visitors, but you should also look out for the Black and White colobus, red tailed monkey and gray cheeked mangabey. Birds like the sun birds, pittas, and other bird species and traditional uses of plant species within the forest. This walk is for six persons per group.

Forest Hike: This seasonal 12km hike is restricted to the dry seasons of mid November-February and June-September. It explores the park’s diverse habitats including tropical rainforest, riverine forest, swamp and grassland. You will have the chance to see a wide variety of bird species and primates and perhaps also duiker and bushbuck. The walk begins at 08:00 from Kanyanchu Visitor centre and ends at the elephant wallow around 14:00. Take enough water and snacks.