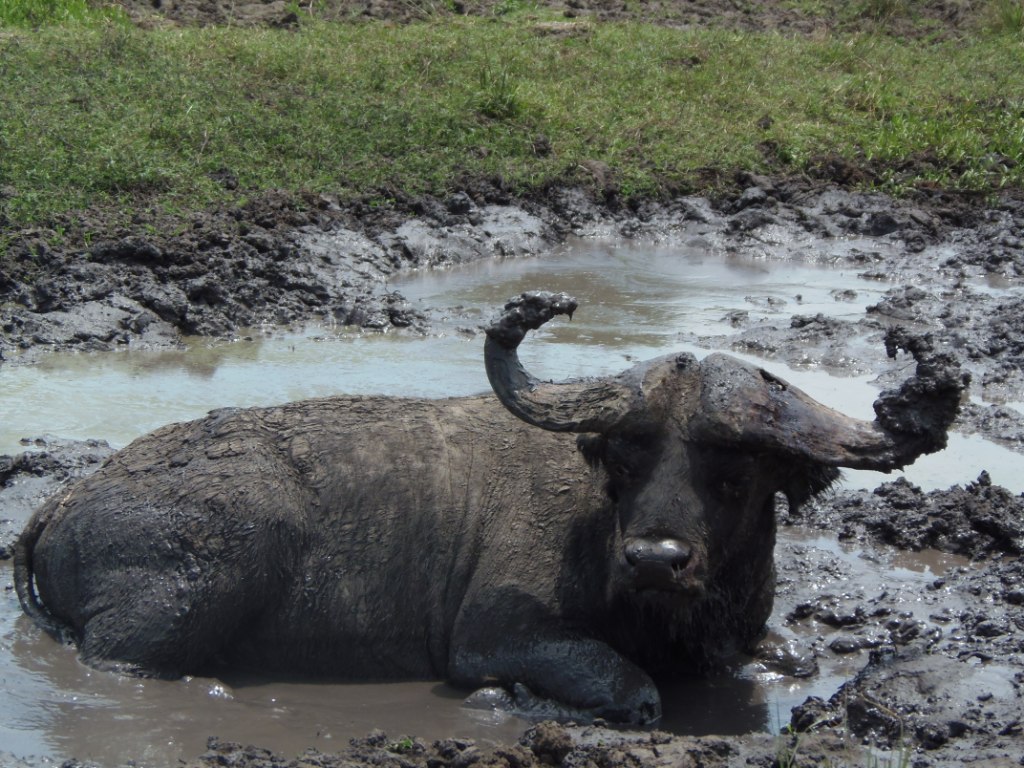 QENP is located in Western Uganda is one of the most popular game reserves for safaris. The park covers 770 miles ² (1995 km²). Road access from Uganda’s capital city of Kampala is 206 miles (420km) taking about 6 hours. There is a landing strip at Mweya lodge for light aircraft or a larger airstrip at Kasese town.It stretches from the crater-dotted foothills of the Rwenzori range in the north, along the shores of Lake Edward to the  remote Ishasha River in the south. The park has 611 recorded bird species in the Kazinga channel sanctuary which covers an area approximately 207km. QENP also has 95-recorded species of mammals which include Lion, Buffalo, Elephant, Hippo’s and many more. Other park inhabitants include 10 primate species which include the Warthogs, Antelopes, Giant Forest hog, Chimpanzees, the Black and White Colobus Monkey,Olive Baboon, Uganda Kob, Water bucks and leopards.
QENP has the most amazing number of species. Kazinga Channel is believed to  contain the world’s largest concentration of hippos. The Maramagambo Forest, south of the Kazinga Channel is also home to large numbers of chimps, plus a number of other monkey species.

Kibale National Park is located in the districts of Kabarole and Kamwenge, approximately 320 kilometres, by road, west of Kampala, Uganda’s capital and largest city. Fort Portal in Kabarole District is the nearest large city to the national park. The geology consists of rocks formed in the Precambrian period which are sedentary, strongly folded and metamorphosed. The Toro system overlaying these rocks forms prominent ridges of quartzite and sometimes schists and phyllites, which are intruded by amphibiolites, gneiss and granites. Some hills have layers of hard laterite exposed on them. About 90% of the Park is overlain by red ferralitic soils of which 70% are sandy clay loams in the North and 30% are clay loams in the South. These soils are deeply weathered, show little differentiation in horizon and are of very low to moderate fertility. The remaining 10% is where fertile eutrophic soil occurs on a base of volcanic ash limited to Mpokya and Isunga areas on the western edge of the park.The park has a tropical type of climate with two rainy periods, March to May and September to November. The annual mean temperature range rises from 14° – 15°C, – minimum to 26° – 27°C maximum. The annual rainfall is 1,100 – 1,600 mm. There is a pronounced dry season in December to February. Rain falls more in the North than in the South.Kibale National Park contains one of the loveliest and most varied tracts of tropical forest in Uganda. Forest cover, interspersed with
patches of grassland and swamp, dominates the northern and central parts of the park on an elevated plateau.
The park is home to a total of 70 mammal species, most famously 13 species of primate including the chimpanzee.It also contains over 375 species of birds. Kibale adjoins Queen Elizabeth National Park to the south to create a 180km-long corridor for wildlife between Ishasha, the remote southern sector of Queen Elizabeth National Park and Sebitoli in the north of Kibale National Park.The Kibale-Fort Portal area is one of Uganda’s most rewarding destinations to explore.

A 2 hour Boat Cruise on the Kazinga Channel filled with sights of relaxing Hippos mixing freely with Buffalos,a variety of birds hovering, meeting elephant herds and or spotting a pride of tree climbing lions in Ishasha sector in the morning game drive and picturesque view of the Rift Valley escarpment & Crater Lakes, makes QENP a must visit for any visitor in Uganda.

Equator Water Experiment: Marvel at seeing the water turn in different directions in the southern and northern Hemispheres.

Game Viewing & Safari Drives; Early Morning Game drive to the Kasenyi Sector in search of Lion and large herds of Buffaloes and Elephants.

Chimpanzee Trekking Kibale National ; Enjoy walking in the dense forest  in search of our closes cousins the Chimps – along the way see the other primates like monkeys and olive baboons and a variety of birds.

Meet & greet at Airport/Hotel/residence in Kampala.

Drop off at Airport/Hotel/Residence in Kampala.

4WD Safari Vehicle with Pop up Roof with Fuel for 3 days .

Game Drives as per the Itinerary.

All meals at the Hotels on Full board basis as indicated (Included).

2 Bottles of mineral Water per person per day

Soft Drinks at Dinner and lunches at Lodge.