Uganda is one of the few countries in the world where the imaginary line divides the earth into two half passes. The Equator crosses into Uganda at a point situated 72km south of Kampala along the Kampala – Masaka road.

“The equator”, simply said it is the imaginary line that divides the earth in half, with the north on one side and the south on another.At the Uganda Equator you observe this by a line drawn in the middle of the lane, with a monument on both sides that state “Uganda Equator”.

Kampala is the largest city and only capital city of Uganda. It is housed on 7 major hills. The city is graced with very hospitable and friendly people from diffrent ethinic backgrouds.

The 7 Hills of Original Kampala include:

Namirembe Hill is the home to the Namirember Anglican cathedral. The Protestants were the first christian missionaries to arrive in Uganda. Also known under the name of St. Paul’s Cathedral, it is the oldest (Protestant) church in the whole of Africa, whose construction began in 1890.

Rubaga Hill which houses the Rubaga Catholic cathedral and this acted as the headquarters of the white fathers.

Mengo hill where the present Kings palace(Lubiri) and the headquarters of the Buganda Court of Justice and the Lukiiko, Buganda’s parliament(Bulange) are found.

Kampala Hill which is also known as Old Kampala, which means the hill of the impala and Kampala got its name from here. Its where the Fort Lugard was located.

Kololo Hill: one of the hills closest to the heart of Kampala. Kololo has a cool and peaceful atmosphere. To the East, it is bordered by Naguru, Bukoto lies to its north, Mulago to the North–west, Makerere to the west, Nakasero to the south-west and Kibuli southwards. Kololo got its name from Rwot Awich, the paramount chief of Payiira in Acholi, who was in 1912 imprisoned on the hill by the British.

The Royal tombs of the Buganda kings Mutesa I, Mwanga II, Daudi Chwa II and Mutesa II in a huge tent built out of wood and straw. It is a World Cultural Heritage by UNESCO.

The Uganda Museum was established in 1908. On display are aspects of Uganda history. Exhibitions on Geography, Culture and History of Uganda. It is the oldest museum of its kind in Africa.

Martyrs’ Shrine  just as the Kasubi Tombs a structure with cultural and historical significance for the Baganda; Memorial of the massacre in 1886 of a group of about 20 people who had converted to Christianity; Meeting point of an annual commemoration on 3 June.

Nakasero is the largest market in Kampala city, where mainly African foods are sold. But also Mediterranean products can be found here.

The Gadaffi Mosque in Old Kampala, which is the biggest in Africa, is a must see. It is a reminder of Uganda’s notorious leader Idi Amin Dada, who initiated the idea of its establishment and his bosom friend Muamar Qaddafi of Libya, who completed its construction.

The Bahai Temple is an elegant piece of architecture in Kanyanya, graced with extensive gardens. It is the only one on the African continent.

Ndere Troupe is a culture tourist’s dream come true. Oral literature is still alive here, with live traditional music and drama keeping audiences on the edges of their seats.

JINJA THE SOURCE OF RIVER NILE

Jinja District is located 80kms east of Kampala city at the convergence of Lake Victoria and the source of River Nile. The Nile is the longest River in the world, traveling 6696km (4184 miles) from the source of the White Nile (Victoria Nile) in Uganda to the Nile Delta in Egypt. It is marketed as a discovery of one of the first European explorers called John Speke, is a unique attraction globally.

The Nile River flows from Lake Victoria at what was the Rippon Falls and into Lake Kyoga. Still the Victoria Nile, it cuts a rough passage west across Karuma Falls and through the narrow pillars of Murchison Falls towards Lake Albert. Finally the Albert Nile meanders along a slow wide corridor into Southern Sudan up to the Nile Delta in Egypt then to Mediterranean Sea. Jinja is regarded at the adventure capital of Uganda. 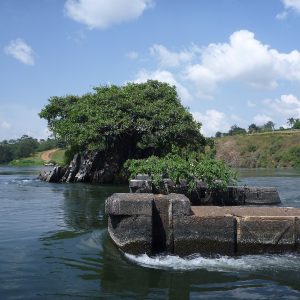 Lake Bunyonyi and the Kigezi Highlands.

Lake Bunyonyi is a famous tourist destination located in Kabale district with a few kilometers from the Rwandan border. Bunyonyi means “a place of little birds” offers refreshing experiences ranging from bird watching, canoeing, and swimming. There are a number of budget and mid-range accommodation options available at the lake and in the nearby Kabale town. Whether you are on your way to the mountain gorillas or Rwanda, Lake Bunyonyi is an ideal choice for a stop-over.

Lake Bunyonyi is the second deepest in Africa. It is 900m deep. The lake meanders along the famous Kigezi Highlands covering 24 kilometers with a width of 7 kilometers. The Lake is spread by 29 green islands including Bwama, Bushara, Akampene, Njuyeera and Bucurunuka Island.

Lake Bunyonyi attracts bird species like weaver birds, herons, and the grey crowned cranes. The temperatures and moderate and its really cool in the morning as mist surrounds Kigezi highlands. Birding is the major activity that attracts people to Bunyonyi. People relax here after trekking Gorillas in Bwindi.

There are adventure opportunities while at Lake Bunyonyi including canoe rides to explore the lake, nature walks, visits to the local communities especially the Batwa (Pygmy), hike the Kigezi hills, bird watching and community walks, spot fishing, kayaking and boat cruises . Quality lodging and camping is available close to the lake and on some of the islands.

Kalangala is comprised of 84 islands on Lake Victoria with only 63 of them inhabited. The Ssese Islands that make up Kalangala District are located 55km from Entebbe, Northwest of Lake Victoria. The district is part of Buganda Kingdom, housing many of Buganda’s cultural sites, including Luggo forest which has the Ddamula, a tree cut to model a stick that prescribes full instruments of power given to an incoming Premier of Buganda. There is also Bukasa Shrine one of the most crucial shrines in Buganda.

Nsirwe Island, famous for both bird and spider breeding,Bugaba Island, the birth and home place of the African Grey parrots.,Bukasa Island with caves that keep Buganda’s heritage and Nanziri falls, another beauty that attracts many tourists from all over the world.