To Samuel Mugisha, leaving his small business in Kisoro to go and learn Japanese in Japan was more than an opportunity to explore and have a change of environment. It was a one year opportunity that was shared by a visiting Japanese professor in Uganda, a one Motohito Sano. This training was to change his work life forever.

The stories he had heard of people staying and working in Japan were tales of success since it was easy and very lucrative to engage in trade of Japanese products in Uganda. By the end of his one year of learning Japanese language, Samuel thought he would have made enough money to buy himself a car, build a house and pay his siblings’ schools fees. How wrong he was!

Being a foreign student, he was to spend the entire year in class with only four working hours per day hours according to the regulations of his student’s visa. Samuel Mugisha was the first African to study Japanese at Kokusai Kotoba Gakuir language school. But he was a poor student. He left Uganda with only USD 500 which was spent in the first week of his stay in Japan. As if that was not worse enough, he was left with several debts to clear, his tuition inclusive. All the money he earned from his four-hour part time job went to paying debts and sustaining his upkeep in this foreign and very expensive country. Four months down the road, he contemplated quitting to come back home and resume his business at BIC Resources, a company he had been running with his friends in Kisoro. However, he had only travelled to Japan on a one way ticket.

Being the first boy child of 28, Sam had assumed household head upon the death of his parents. He was paying school fees for them on top of their welfare. This became hard to realize while in Japan and many of them dropped out of school.

However, upon explaining his situation to the school administration, he was encouraged to stay and complete his studies. The school authorities were kind enough to weaver off some payments for him. 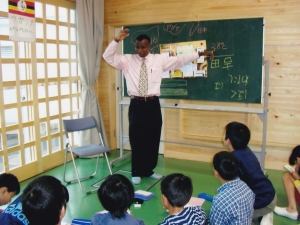 While at school, Samuel participated in a foreign students’Japanese speech contest. He speech was titled: The Ugandan cowboy who came to Japan. This story earned him the second position and also opened him more doors. Various schools in Japan invited him to share his story and they were all moved. At the end of his course, ha had convinced a team of four Japanese tourists to come with him on a tour in Uganda. “…and they were so bewildered,” he recalls with delight.

This opened up Sam’s eyes to an industry called tourism. He realized that Uganda was not known in Japan yet tourism opportunities were very high. After his course in December 2003, he was given a two-year work permit which allowed him to pursue his dream of fully working in Japan between December 2004 and December 2006. 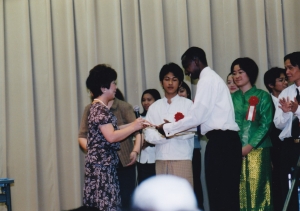 He used this opportunity to market Uganda. In September 2006, he was joined by a number of tour operators at the JATA tourism expo to sell Ugandain Japan. With his knowledge of Japanese language and work experience, this gave him an opportunity to meet and convince the Japan tour operatorsto include Uganda tour packages in their offers.

Upon his return to Uganda in December 2006, he established BIC Tours which mainly deals in Japanese tourism. Close to a decade now, BIC Tours boasts of a tune of 500 Japanese tourists a year and they are optimistic, the numbers are yet to double.